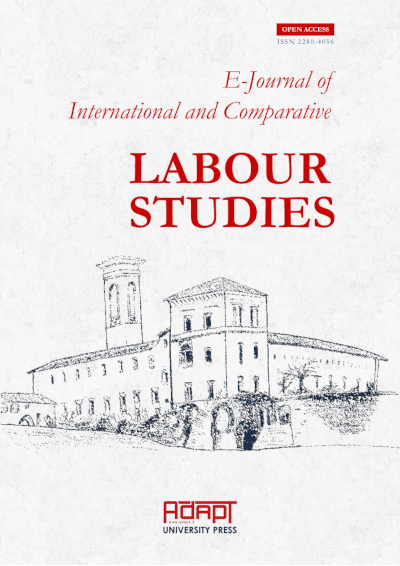 Eight years have passed by since the E-Journal of International and Comparative Labour Studies (EJICLS) came into being. An ambitious project was envisaged at the time – both in cultural and scientific terms – that set in also thanks to the invaluable contribution of Prof Malcolm Sargeant.

In the inaugural editorial of the EJICLS, a commitment was made to “Building the Future of Work Together”. Far from being a simple publishing venture aimed at research dissemination, the EJICLS was intended as an international platform for sharing social innovation projects.

There is no need to discuss the credibility of the journal or to evaluate the whole project around which it was built. Yet, thanks to your support and that of ADAPT’s fellows, significant effort has been put in to establish the EJICLS’ presence among the journals covering labour law and industrial relations issues.

The journal’s figures are there for all to see: from 2012 to 2019, 23 issues and 208 articles were published, covering topics from more than 50 countries. The papers were collected in eight volumes, which were made available open access to ensure widespread availability. The many partnerships and research projects set up around the EJICLS attest to its success as a cooperative platform, especially when developing ideas and when engaging in comparison on a number of work-related issues, by adopting a consolidated and interdisciplinary approach. The EJICLS should be conceived as a discussion forum, while always remaining committed to high-quality research. However, this might not be enough when facing the major challenges taking place in our fields in the attempt to build the future of work together, which should be better than the one we have inherited.

The COVID-19 pandemic is illustrative of this state of affairs, as it highlights the current limitations of the academic debate and of our contribution as individual researchers to a more modern and inclusive labour market.

As early as eight years ago, scholars from different disciplines had to deal with important challenges concerning the future of work, businesses, workers and industrial relations, in order to respond to geopolitical, economic, demographic, social and labour market changes. Today, these challenges are even more serious and are further magnified by the consequences of the pandemic, which will have a knock-on effect in different countries as far as work, politics and society are concerned. Against this ever-changing background, there exist few certainties andthese are the ‘values’ and the ‘norms’ expressing these values.

The natural development of the journal and its cultural manifesto has thus led to the setting-up of a new and promising group of early-career researchers gravitating towards the EJICLS, as a way to support its new editorship and editorial line. This was done mainly to strengthen the EJICLS’ legal dimension.

Enhancing the legal perspective does not mean abandoning the interdisciplinary approach that has characterised the EJCILS since its creation. Yet it seems necessary to refocus the contribution provided by human, social and economic sciences to legal issues, emphasising the labour law and industrial relations dimension to avoid promoting theoretical assumptions that are detached from reality.

In the attempt to keep up with the trust of the academic community in relation to the quality of the contributions published in the previous issues, continuity will be ensured by focusing on certain aspects, which have been grouped under a number of sections. Some of them are more concerned with the legal perspective (Labour Law, Labour Market Law, Social Security Law, Anti-discrimination Law and Human Rights) while others have a more comparative dimension (Industrial Relations, Labour Issues). We decided to keep the ‘Book Reviews’ section, as it has always been appreciated.

The former joint managing editors have also ensured their presence in the new edition of the EJICLS, handing over its editorship to Prof Valeria Filì.

A proper balance between change and continuity has therefore been achieved, thanks to the acknowledgment and alternation of prestigious academics, with the declared intention of providing the new EJICLS with a more marked legal connotation.

Readers will have the last word on the reputation and credibility of a project which continues with a renewed commitment and energy.